Mitch Benjamin is the barbecue businessman and creative mind behind the burgeoning “Meat Mitch” brand. His love of barbecue began the day he landed in Kansas City as he quickly embraced the city’s culture. From Lancaster, Pennsylvania, Mitch moved to Kansas City – the home of barbecue – in 1996 and started searching far and wide for the best the town had to offer. He soon began perfecting his own and ventured into competitive BBQ, participating in the American Royal BBQ competition in 2003. He was hooked and has since trained under and worked alongside multiple World Champion pitmasters.

After years of honing his craft, Mitch and his smoking posse dove head first into creating their own unique blend of spices. They created the original “Whomp!” and “Naked” BBQ sauces and dry rub that perfectly complimented their contest entries and respectfully represented Kansas City.

Mitch and his buddies immediately took their new creations on the road, using their new sauce and dry rub mixtures to win over the taste buds of the barbecue judges. They found instant success – winning overall Grand Reserve Champion and First Place Ribs in the 2010 Wild Blue Kansas state championship. In 2011 and 2012, the Meat Mitch Competition BBQ Team took home trophies and awards from the top barbecue contests in the world, including the heralded Memphis in May’s BBQ Sauce contest and the world’s largest, American Royal World Series of Barbecue. After winning both First and Second place at the “Gettin’ Sauced” Barbecue Sauce Competition and Festival in Austin, TX, Taste of the South Magazine declared Meat Mitch’s BBQ sauce the People’s Choice winner for 2012.

Mitch had the distinguished honor of being selected as the Barbecue Ambassador to Major League Baseball for the coveted All-Star Game and events held in Kansas City this past summer. Hall of Fame icon George Brett, ESPN announcer John Kruk, and several other All-Star celebrities enjoyed every finger-licking bite of Meat Mitch’s barbecue ribs, Kansas City style burnt ends, and other fine barbecued meats so much the Kansas City-based company became an instant hit across the nation.

With over 6 million TV viewers and the thousands buzzing on social media about Meat Mitch’s ‘que and famous sauces, people around the country flocked to MeatMitch.com until the website eventually crashed! 2012 has been about building his brand and Mitch is looking forward to showcasing his pitmaster prowess and smoker skills at many more barbecue contests and events to come.

Mitch is well-known throughout the barbecue community. He has been interviewed on numerous TV stations, has been featured on nationally syndicated barbecue and sports talk radio shows, was the second pitmaster featured in Oklahoma Joe’s “Burnt End” in-house periodical and is active on social media. He is a life-time member of the Kansas City Barbeque Society (the sanctioning body of all official barbecue contests around the world) and is very involved in the Kansas City barbecue community.

In the past ten years, Mitch and his competition team have grown their infamous annual Meat Mitch BBQ Bash into one of the American Royal’s most sought-after event tickets in Kansas City. When he’s not behind a BBQ smoker or making a slab of his famous Meat Mitch ribs for celebrities, Mitch is hitting the links as an Account Executive with TaylorMade Golf Company. Throughout his career, Mitch has received numerous professional honors and recognition at TaylorMade, including being recognized nationally as their “Salesman of the Year”. 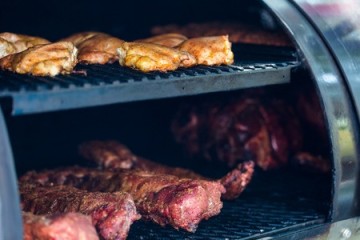